The plane landed before 7h at Tocumen Airport. The drive to Casco Viejo took about an hour due to traffic. Check-in time was 14h and we arrived early. The solution was to just hang around town and have breakfast. The plane’s omelette and pancake didn’t last long. 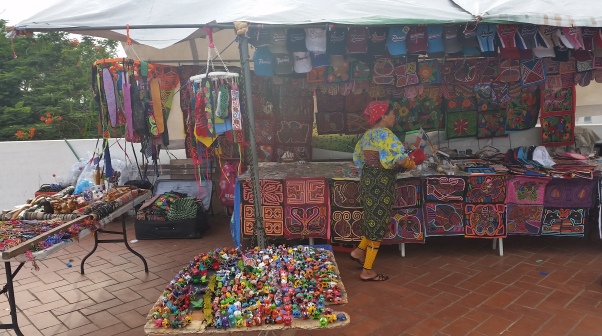 We all agreed that Casco Viejo is a lovely place. Ruins and renovation go hand in hand. A bit expensive for a family of four on a budget (U.S. dollar is the currency used here). Though parents could not help but gave in to the 2 mojitos + 1 free during the happy hour.

We skipped buying a new hat for Erin to replace the one of Lola’s now battered and holed. She didn’t want to throw it at first but eventually did so and kept the ribbon for souvenir.

After  3 cities, we needed to examine our spending and made some modification.

There are so many places to visit but we opted to explore the town and went to Miraflores thru Uber ($5). Our driver pointed us many spots during our ride to Miraflores. The latter is one of the 3 locks in Panama Canal. We have missed the ship’s schedule in the morning and didn’t want to go back at 15h to see it. The cost of our taxi ride back to our apartment was a bit expensive.

After two nights, we headed to El Valle de Anton.

It’s a  2 hr. journey  from Casco Viejo which cost $85. Though most of the times winding road, the green vegetation along the way kept me awake. It’s in Hostal Orquidea where we decided to stay. A pleasant Japanese named Ayumi, welcomed us on our arrival. 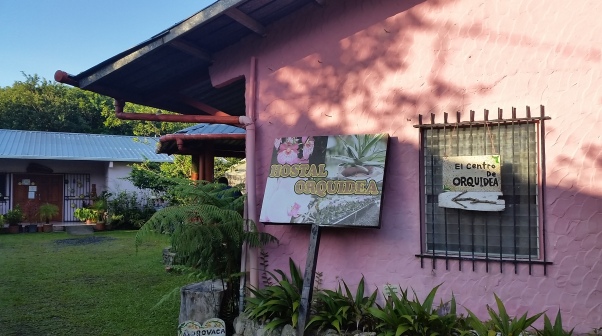 Teacher husband chose this accomodation, taking into account my love for gardens and greenery. Thought the orchids were not in bloom, other trees and flowers made out for it.

on our way to the center 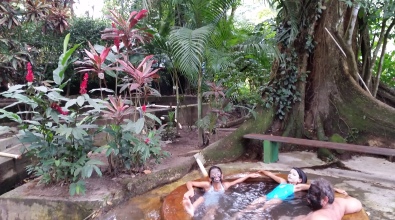 We both agreed on the fact that staying in an accomodation like the hostal gives us possibilities to meet other people.  Like the  french couple who was also staying  in the same hostal. They are well travelled and the common dining area is our place to converse. We also briefly chatted with a Canadian woman who heard Carlo giving lessons to the girls. She was visiting the garden with her children and a friend. Learning that we are travelling for a year, she said  that it’s the best gift we can give to our girls. Apparently,  she has done the same thing with her children. She briefly shared her experience and how her son while travelling with her at 17 years old decided to travel on his own, met a girl and now lives in Germany with the girl he met while travelling.

On our second day, we were able to go to Pozos Termales, where we camouflaged our faces with mask and enjoy the warm pool. We went during a  weekday and luckily  the place was not crowded.

We  left El Valle on a sunny day.

After 2 nights in Hostal Orquidea, we went to San Carlos and stayed in Beach Inn Hotel.The bus ride from Calle Centrale of El Valle was half an hour. One can get the bus ($1.80 fare/person) out of El Valle from the center  but we opted to hail one by the road. It was a coaster type vehicle with AC, comfortable inspite of the winding road . Was worried for my youngest who easily get car sick.

a day on the beach

someone found his playa

We like the village, our accomodation is near a supermercato and a restaurant. We decided to have our lunch in what we named our fave resto 🙂 and have our dinner in the rooftop ( we didn’t have a kitchen in our room) which were composed of crudités, tuna (much to my regret, there was no cornbeef anywhere!) and bread. This was the time when  we long for the bakery in Plans-les Ouates.

It was raining cats and dogs on the morning of our departure from San Carlos. Then received an email that our supposed lodging cannot accomodate us. With matching two excited kids and zen teacher husband (he is always calm and unpertubed in my moments of panick and anxiety which really annoys me ) my stress level was on high.

We eventually got another accomodation and was able to leave San Carlos.

From San Carlos, we hailed a bus, asked the driver if he was passing by Farallon, Playa Blanca. This one was going to Chiriqui. We got down Playa Blanca, hailed a taxi and learned that our destination is “abajo”, so we returned and was taken to the correct direction. The Farallon signage  was not that visible for us, maybe we should have said Royal Decameron because there was a big sign on that road going to Farallon. 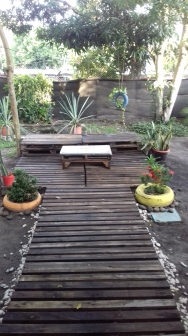 The beach is only few steps from the hostal. Just like in San Carlos, the grocery stores are own by Chinese. There are also few places we went for drinks and food. We particularly like Coco Blue where I have celebrated my birthday. Food was really good as well as the ambiance. Their cevice frito was a good discovery.

For our return to Panama City, we were driven by Alessandra to Rio Hato  where we took the bus to Albrook Terminal. From there we took a bus to our hotel. We have the room for a few hours. The shuttle bus would take us to the airport at 2h30 for our 5h05 flight to Quito, Ecuador. The girls were ecstatic over our room,saying it was the best room ever.

Panama was awesome but the Amazon Rainforest is waiting.